Benefits of Floating Plants for Ponds

Floating pond plants are beautiful and delicate-looking plants. Their attraction is enhanced because they don’t stay put in one place but instead move around freely on the water surface. Their movements are determined solely by the flow and wind of the water.

These aquatic plants can shade your pond, especially if there aren’t trees or other shade structures. Floating pond plants reduce the sunlight that hits the water. This helps to reduce the growth of algae. They can also compete with algae for nutrients in the water.

However, floating water plants also have their downfalls. They reproduce quickly. They are not dependent on pollination but can multiply quickly via offshoots and larger plants splitting into two new plants. They are often considered invasive species because of their high rate of reproduction.

Side-effects from severe overgrowth include a decreased gas exchange at the water-air interface. Large numbers of floating pond plants at the water surface can block sunlight and prevent it from reaching submerged plants. This can cause oxygen deficiency in the pond plants, which can have negative consequences for your fish. If this happens for too long, the water becomes contaminated with sludge gas, and your water plants will eventually die. The toxic environment can eventually kill your fish, leaving you with a pond that appears lively from the surface but is dead below.

You can manually control the growth of your floating water pond plants by using a spoon net or scoop to remove any unwanted plants. You might have larger fish like koi carps and goldfish that may eat your floating plants. This will reduce their population naturally. You should only use chemicals to kill your floating plants as a last resort. It is essential not to harm other plants and fish. The dead plants can sink to the bottom and cause water pollution.

Using non-hardy floating pond plant varieties is another option to manage these plants. But, only works if you live in a cold climate. Warmer climate plants won’t be able to survive winter. This puts an end to their potential for propagation. However, removing most plants by hand is essential before frost sets in. If you don’t, dead plants can become toxic and make it difficult for your fish to overwinter.

We recommend that you only add native floating pond plants to your pond. Waterbirds often transport them to new water bodies. These birds can carry their roots and offshoots to recent locations by sticking to their feet or plumage.

Pro Tip: The open top of many pond filters and upper streams or pools of water are excellent places to place floating water plants. They are helping to hide the filter enclosure and provide extra filtration.  If your waterfall carries them over the edge of the filter- use a stick or fishing line to hold them in place.

Caution: Some floating pond plants can be considered invasive in many areas. Below are descriptions that give information about the natural habitats of these plants. Seek guidance from an experienced gardening expert or a local wildlife agency if you’re still not sure which floating pond plants would be best for you.

These plants will not survive the winter in cold climates. 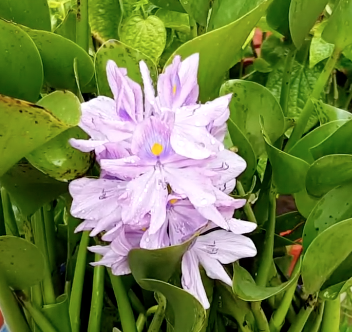 The water hyacinth floating pond plant is a beautiful, thick-green plant with gorgeous lavender flowers. It is one of the most prolific flowering floating plants, and it helps reduce excess nutrients in the pond water quickly.
It is native to the subtropical and tropical rainforests of South America. It has since been introduced to many other habitats and is now found in nearly all areas with a moderately hot climate.

It is considered invasive because of its vigorous growth. It is a trendy pond plant due to its beauty. It is best to avoid it if you live in areas with winter frost. It will not survive a cold winter, so it isn’t an ongoing environmental threat.

The EU banned all water hyacinth sales in 2016 due to its invasive nature. But it is still one of the most popular floating pond plants for sale today.

Azolla caroliniana has a symbiotic relationship to Anabaena azollae, a special cyanobacterium. These bacteria can fix nitrogen. Carolina mosquito fern can accumulate large quantities of nitrogen, which has led to it being used as a fertilizer in Asia for rice fields. The fern is released into the water when the rice fields flood. The thick mats of fern suppress weed growth, and the nitrogen collected by the rice plants is used to benefit the fields once they are drained.

This free floating pond plant spreads a blanket of red to green shade over the pond. It can be contained easily with a floating ring or left to cover the pond’s entire surface in warm spring and summer.

If allowed to cover your pond fully, you will need to add oxygen with a pond aerator.

Mosquito Fern measures approximately 3/8 to 1 cm in width. The leaves of the mosquito fern are arranged in a quilted pattern, hiding the stem. Each stem has a single root. Usually found in calm ponds.

Many micro-and macroinvertebrates can be found in dense colonies of mosquito fern. Fish use these invertebrates to feed on and are incredible for shading out weeds in aqua production systems, adding nitrogen, phosphorus, and organic matter, and improving soil structure in bog areas.

It must be grown in water or wet soil. If it is not, it will quickly die. Although Azolla can tolerate water pH levels between 3.5 and 10, it will thrive in water between pH 6.5 to 7.5. Azolla’s optimal temperature is between 68F and 82F. 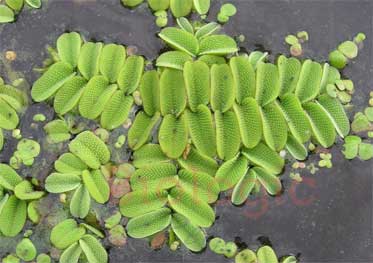 The floating Fern (Salvinia natans) is an annual plant native to mostly all continents. Although it can thrive in warmer temperatures, it doesn’t usually spread as vigorously as other floating plant species. It is considered an endangered species in some parts of Europe.

It is a beautiful floating water plant that fish use as cover or for spawning. It will die in autumn, but its spores can regenerate it in spring. 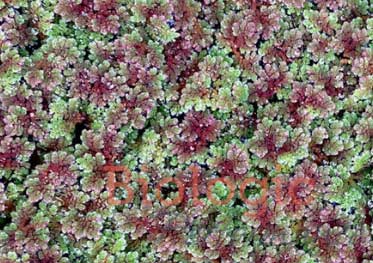 There are many species of mosquito ferns in this floating plant species. They can be found worldwide, including parts of Europe, Asia, Australia, and North America. Although they are all small at about 1 inch (2-3 cm), the individual plants stick together to form dense mats that can cover a whole water surface. The legend behind the name mosquito fern covers water so tightly that no mosquito can escape. Making it one of the most tiny floating pond plants for sale.

The mosquito fern tiny floating water plant can double its size in just three days in ideal conditions. It can withstand short periods of drought, as well as frost. But, it cannot resist a long winter, so it is considered non-hardy. 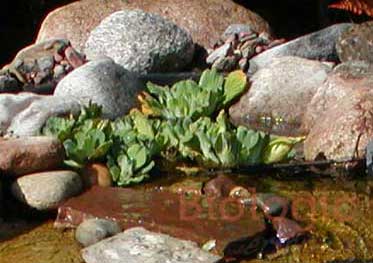 Water lettuce floating pond plants’ origins are not clear. It was first discovered in Africa near the Nile River. Others suggest that it is of South-American origin. It is now common in all tropical and subtropical regions of the world.

It is beautiful and shade-friendly. Water lettuce is the most prolific floating aquatic plant. It can grow to the point of overgrowing your pond if you don’t pay attention and regularly remove any unwanted parts. Koi fish love to nibble on water lettuce root systems.

Added to the EU’s list of invasive plant species in 2012. 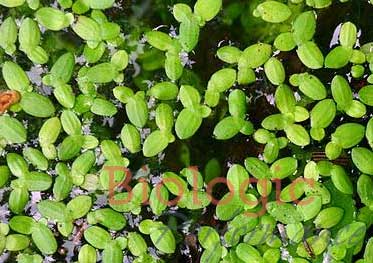 Common duckweed, also known as lesser duckweed, is a small-sized plant that doesn’t grow more than 0.03 inches (8 mm). One plant can have 1 to 3 leaves and as much as 0.8 inches (2 cm) of the root. It hangs in the water.

Although the blooming season is May to June, it is pretty rare. Propagation occurs when more than one plant has three leaves. It then splits into two plants. Waterbirds help the duckweed to conquer new habitats. The plants stick to their feet and plumage, and they are transported to clean waters.

Ducks and other waterbirds eat duckweed- because duckweeds are high in protein, they can even be used commercially to feed livestock.

Duckweed is not only found in the arctic but can also be found on every continent. 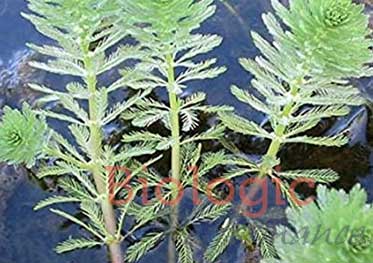 Parrots feather floating pond plants were initially found in South America’s Amazon region- but can now be found on every continent except Antarctica.

It can grow too tall with plants up to 6 feet (2m) in height and spread onto banks of water bodies. It can form emergent stems up to a foot long (30 cm) that extend out into the water. It bears pinkish-pinkish white flowers in spring and occasionally in autumn.

It was once a favorite plant for fish tanks and ponds, but it can cause problems if released into the wild. It can become a problem for swimmers as well as boat propellors.

Myriophyllum aquarium has been banned in many US states and the United Kingdom due to its invasive nature. 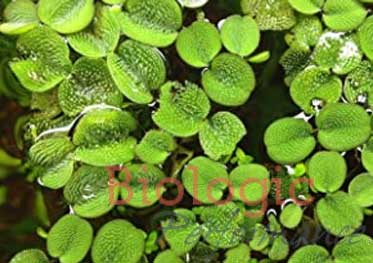 Common frogbit, also known as European frogbit, has beautiful leaves like smaller versions of water lilies. They can grow between 0.8 and 2.8 (2–7 cm).

The flower’s blooming time is May to June. It bears three white leaves with yellow stamina. It forms a type of bud in autumn. The dying plant is split, and the bud sinks to its bottom. These buds can rise again to create new plants in spring.

The common frogbit can be found in Europe, Northern Africa, and Asia.

It does not reproduce as quickly as other floating pond plants in its natural environment. Frogbit is considered to be an endangered species in certain parts of Europe.

It is an invasive plant in North America, particularly in Canada. 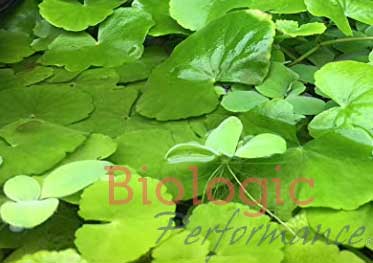 Floating pennywort has now spread to Central Europe and the British Isles- and can reach a height of up to 14 cm (35 cm). Its roots can reach the ground, but they can also be floating.

It was designated an invasive species in 2014 in the United Kingdom and was added to the EU’s “unwanted species list” in 2016. It is best to avoid it if you are in an area native.

Some of these fast growing floating pond plants can quickly take over entire waterways and are considered noxious weeds.

Take care to dispose of cuttings and plants properly not to endanger waterways.

They can be composted or used as mulch.

You can add a combination of submerged and floating aquatic plants to your pond. This will enhance the beauty of the pond and improve the ecosystem.