“Nishikigoi,” a name first used in Japan 200 years ago, in a village in the Niigata Prefecture. It means “colored” or “brocaded” carp.

Magoi-keepers farmers bred black carp (or Magoi) to produce the first Nishikigoi. They were experimenting with the cross between a red and white carp. The result was a vividly colored carp capable of surviving harsh winter conditions. It was rare and beautiful, making it stand out from all the rest. Nishikigoi was regarded as a delicate artifact of art and became more popular with the growing awareness.

Koi, a homophone of another Japanese word meaning “affection” love,” is the Japanese homophone.

Among other symbols, koi fish are symbols of love and friendship in Japan.  They are becoming a symbol of peace around the globe.

The Heian period (794-1185) saw koi fish become popular and were kept by Japanese nobles. Nobles loved to feed their koi “Fu,” which was considered a valuable food source. It is still enjoyed by many people today. The Fu was sprinkled on the Koi’s surface, and they were reported to be calm, not greedy. People nurtured peace by sharing the precious Fu with the fish, and by observing their modesty, they were able to cultivate a sense of peace. This gentleness could be passed on from one child to the next, and it has been since.

It isn’t easy to find a country without koi hobbyists at the moment. The koi’s peaceful and friendly nature attracts people all over the globe. It is a beautiful therapeutic experience to interact with fish. Watching them swim is calming and melodic.  Their graceful movements draw you in and help you forget your worries.

In n Nihon Shoki (the oldest Japanese chronicles), it is said that Emperor Keiko (12th emperor) rode by “Kuguri No Miya” to appreciate Koi while he was on his way to Gifu Prefecture with his vassals. Emperor Keiko favored mainly black-colored koi with a few red Koi, according to legend. 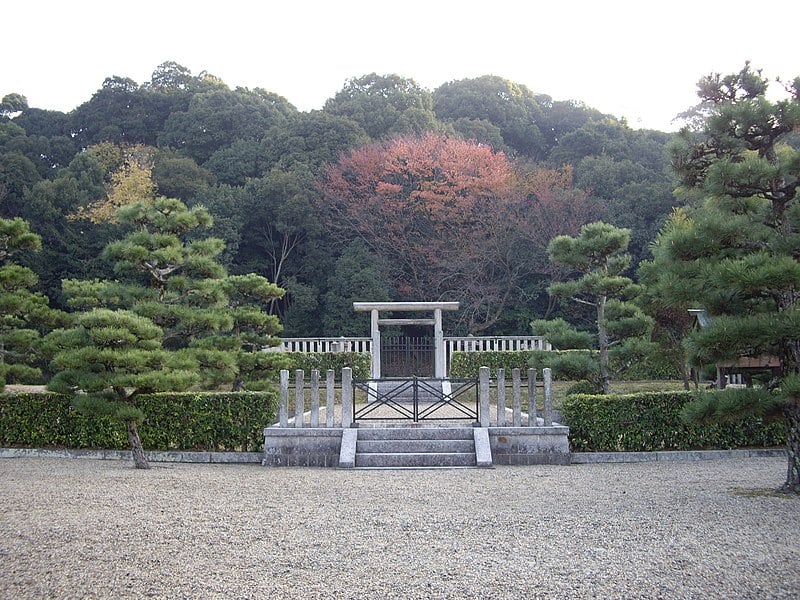 Mausoleum of Emperor Keikō – Takanuka, CC BY 3.0, via Wikimedia Commons

Where did the red Koi get its name? They were created naturally through mutations and then slowly selected and bred.

The Yamakoshi Village and Ojiya City were the first Nishikigoi Magoi Carp offspring. They displayed red and yellow colors and patterns.

Residents noticed the change and began to breed the fish in Niigata’s fertile climate and soil. After many attempts, Japanese Koi were eventually recognized as the “swimming gem” today.

Nishikigoi is raised in both indoor and outdoor conditions. This is a labor-intensive and selective process. Each nishikigoi is evaluated to determine the best and brightest patterns.

Over a thousand years ago, Carp were first bred in China for color mutations. This breeding eventually led to the development of goldfish.

Different koi colors were unknown to the outside world in Japan until the early 1900s, when koi were first displayed in Tokyo, Japan. All other nishikigoi varieties were created from this original set. It has since evolved into a social hobby among many pond owners. Hobbyists are passionate about joining local koi clubs to learn more about fish and pass it on to future generations. Breeders are committed to ensuring that the culture continues its growth and flourishing.

Water quality is crucial for healthy fish. This is why Japanese breeders use the best quality water supplies to maintain their ponds. Many breeders use koi foods to give their fish vibrant colors and a strong body.

Fun fact, koi fish have teeth– but they are located in the rear of their throat.  So you don’t need to worry about being bitten.

What is the Meaning of Nishikigoi?

This koi fish is known as “the swimming or living jewel,” Its unique name comes from the Japanese word “Nishiki,” which means beautiful or elegant things.

There were four treasures in ancient Japan: Kin (gold), Gin (silver), Sango (1/4th of an inch), and Aya Nishiki (1/4th of an inch). It is believed that “Nishiki-goi,” the name given to “Nishiki,” was named after “Aya Nishiki.” Nishikigoi can also be compared to the multicolored brocade patterns of traditional Japanese woven silk fabric “kimono,” known for its striking beauty and vivid colors.

Ggoi or koi refers to the Japanese term for carp fish, meant to eat. You might also say nishikigoi, “living jewel koi.”

These carp or Koi were initially created in Japan to provide a steady food source. However, they quickly evolved into ornamental fishes that people keep in their gardens ponds to add beauty and shine.

The “living jewelry” concept grew, and the koi became a symbol for success, ambition, perseverance, and progress in life. To be successful in life is to be a fish.

Japanese would build homes with a pond and keep nishikigoi to signify satisfaction.

How Many Different Types Are There

Koi breeding began in Japan around 1914. It has since spread to other parts of the country, lakes, rivers, and temperate waters worldwide.

There is no confirmed number of total varieties of koi, although some experts claim there are 100-200 different varieties. You will mainly be seeing a mixture of 13 main varieties—each with its unique colors, patterns, and scales. Fantastic progress has been made over the past twenty years. Some newer types, including ghost, ogon, and butterfly koi, are not actual nishikigoi.

The colors of koi result from chemicals in their skin cells and not their transparent scales. They include white, brown, red, orange, and yellow, as well as metallic golds and sterlings. Some koi have reflective skin cells that give them a mirror-like appearance. The sixteen categories or general classes that include the varieties are divided into 16 groups.

The Gosanke category is the most popular. It includes Kohaku and Taisho Sanshoku varieties. Sometimes referred to as “the big trio.” Kohaku is white with a red motif that has a variety of levels of quality.

In Japan, body shape is more important than ever. The U.S. values color and pattern more than anything else.

Nishikigoi became so popular in Japan that many koi enthusiasts worldwide competed in championships at a koi show.

These championships and the nishikigoi are so beloved that they were made the Japanese national fish.

Visitors from overseas and local high-ranking people often visit the All Japan Koi Show, an old and essential yearly Nishikigoi event. Even the Japanese imperial family is a visitor! Each year, over 4000 Koi fish come from Japan. They put the Koi show’s subtitle as “Kokugyo no Saiten,” Guo Yu noJi Dian 40 years ago. This was the moment they began to consider the Nishikigoi, their national fish.

If this has created an urge to keep nishikigo in your home, check out the koi pond supplies page or the pond kits page.  Which supplies everything you need with no special knowledge required.

Here is a video of a 1,000,000 dollar koi pond.  Now you don’t need to spend that much to enjoy this fish-but it gives you an excellent example of what one could do on a smaller scale with a koi pond and garden design.

Some countries have seen koi in the wild, causing damage to waterways and threatening aquatic plant life. They are constantly moving and stirring up the water, increasing its turbidity making it unsafe for swimming and drinking. Most of the attempts to eradicate them have failed.

Despite their environmental concerns, Nishikigoi is still a delight to be found in Japanese-style gardens’ ponds. They are a reminder of the beauty and grace of nature and our efforts to conserve and recreate it.