In 1960 David Latimer got curious and decided to plant a glass bottle with seed. He would have never guessed it would turn into a beautiful case study of a self-sustaining sealed ecosystem that has been called “the world’s oldest terrarium.”

In fact, after all these years, David’s sealed bottle garden is still thriving and robust. With thriving plant life, despite not watering it since 1972.

David planted the terrarium back in 1960 by placing a quarter pint of water and compost in the ten-gallon bottle. He then lowered in spiderworts seeding with a wire. Finally, sealing it and put it in a corner filled with sun. Letting mother nature do its thing through photosynthesis.

Photosynthesis puts moisture and oxygen in the air through the plants.  The humidity then builds and begins to rain back down on the plants.  Leaves will also fall and rot, producing carbon dioxide that the plants need for nutrition.

It’s a beautiful example of how nature can support itself.

Larimer did open the bottle in 1972 to water the plant. But, since then, it has remained sealed without fresh water or air.

This is possible because the garden makes its own ecosystem through the magic of the sun (photosynthesis) that is self-sufficient.

“It’s 6ft from a window so gets a bit of sunlight. It grows towards the light so it gets turned round every so often so it grows evenly.  Otherwise, it’s the definition of low-maintenance. I’ve never pruned it; it just seems to have grown to the limits of the bottle.”

David reported to the Daily Mail.

The sealed garden has been placed in the same spot for 27 years in the Latimer’s home and is located in Cranleigh, Surrey and first exposed to the world through Radio 4’s Gardeners Question Time on BBC by Chris Beardshaw.  Chris is not only a television host but also a garden designer.  He felt David’s sealed garden was indeed the perfect cycle of life and a great example of plants’ recycling ability.   Also adding that it is the same method that NASA is interested in bringing plants into space. Saying:

‘”Plants operate as very good scrubbers, taking out pollutants in the air so that a space station can effectively become self-sustaining,’ he said. ‘This is a great example of just how pioneering plants are and how they will persist given the opportunity.”

A bottle garden works by creating a self-sustaining ecosystem through plant photosynthesis and recycling nutrients.

Light is the only input needed externally.  Providing energy for food and growth.  The light shines on the leaves and is taken in by protein-containing chlorophylls (green-colored pigment).  The plant stores a portion of the light as ATP (adenosine triphosphate) for energy.  The remaining amount is used in the plant roots to get rid of electrons from water.

The electrons then are free to release oxygen by converting carbon dioxide to carbohydrates through chemical reactions.

To decay organic material like deal leaves, the ecosystem employs cellular respiration.  This is done by bacteria that take in waste oxygen and release carbon dioxide that helps the plant grow.

The plant will also use a similar process of cellular respiration to break down nutrients it has stored when there is no sunlight (nighttime).

Water is cycled by getting sucked up in plant roots, transpires into the air, then gets condensed into the potting mix.  Beginning a new cycle that repeats over and over again.

Many are skeptical of this being true, and some, like Bob Flowerdew (organic gardener), think that “It’s wonderful but not for me, thanks. I can’t see the point. I can’t smell it, I can’t eat it,”.

Shockingly David Latimer feels the same.  Saying that the sealed bottle garden is pretty boring.  Not really doing much, but it does interest him enough to see how long it can sustain itself.

He plans on passing on this experiment to his kids when he passes.  If they don’t have an interest in it, it will then get passed on to the Royal Horticultural Society in London, England.

If this sounds interesting to you, we suggest searching around the web.  There are many tutorials like the video below that will help you make a bottle terrarium.

It’s a simple, almost zero maintenance, a fascinating experiment that just about anyone can do.

Additional Sources Found on Terrariums by Nature of Home (Website)

If you want something fancy that will make a room “pop” this high end steel terrarium will do the job. It won’t be a sealed bottle ecosystem terrarium like David Latimer’s, but it will certainly look cool.

Glass Bottle to Create Your Own David Latimer Experiment 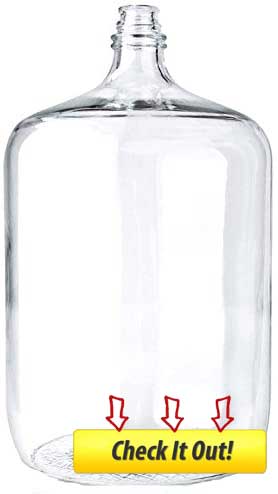 We are still on the search for a huge round glass bottle like David’s. So far, this is the closest thing we can find. It’s 6.5 gallons and will require you to buy a cork separately.

Some Popular Amazon Products for Starting Your Own Terrarium